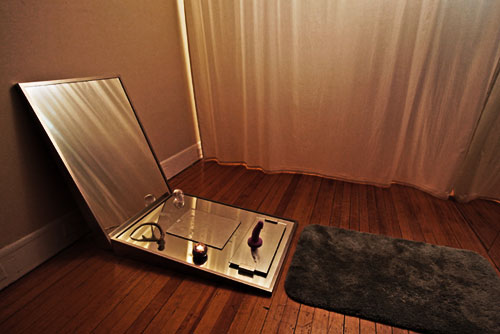 When I heard those words I knew they were true though I did not know how. The first time, I was at a psychic fair, in the late 1990s. I was stepping out to the lobby to meet someone, and I brushed past a woman as I walked past her table. I had no idea who she was and I’d never seen her before.

I looked at her to excuse myself. She glanced up at me languidly, like she was expecting me, and spoke: You will be ejaculating into women less. You will be penetrating them less. You don’t need to do that.

“What do you mean?” I asked, defensively.

“You do know,” she said, her face clear and matter of fact. I walked away, perplexed, though as if I had also been reassured of something. Then I thirsted for cunt and was grateful I would be drinking some tonight. I went out to the lobby to meet my friend, who I knew would share her’s. I flashed ahead to a time I might turn that down, and did not believe it was possible.

Two or so years later I was working with someone I considered a spiritual teacher and healer. During one session, she said I was a sex addict and needed to take two years off; “be celibate for two years,” as she put it. The thought of that chilled me. Two years with no cunt? No fucking? I would be desperate. Did that mean she was right about my being a sex addict?

Then as I was arriving to live in New York, I went to see a massage therapist I’d worked with right around the time of the psychic fair. A long time had passed since I’d worked with her, and her style had changed; she no longer did massage, she did these channeling sessions where she would speak a strange language and translate it. However, she offered to do a combined session for me, where she touched my body doing light massage, and also received her information.

One afternoon when I was in transition from Europe, I was laying on her healing table. It was a quiet, cold Friday afternoon in autumn. Afternoon light came streaming into her cozy studio, as I lay naked on her table.

I told her about moving to New York, and about my relationship to the land here. Then she started speaking a language where I had that distinct feeling: I’ve never heard this, but it’s familiar.

She spoke with a gentle tone that was somehow forceful, or maybe persistent is the word. There was an unusual music to her language. Then she stopped.

“This is the translation,” she said. “You will be penetrating women less. Your body has been asking you for this for a while. You’ll be ejaculating into women less, then you will stop for a while. The women you know will fuck more while you do this. Just relax into this.”

She paused, then she spoke again: “I see a woman in a black dress.”

As she said those words, I thirsted for myself, openly in the presence of another person. I hesitated to say anything.

“I know what you just felt,” she said.