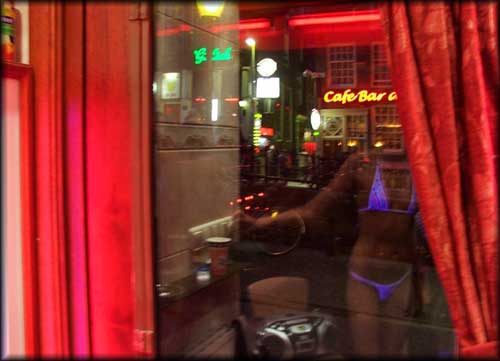 This was my second meeting with Sabrina. I new her from a trip to Amsterdam the previous year. She remembered me and we still had the same strong rapport that drew me to her the first time.

I had picked her out of the ocean of sexworkers available on my first visit to the city because of our psychological connection. I know this is like saying that you read Playboy for the articles, but it’s true. She did not lack for imposing beauty, but there is nothing if not beautiful women working the windows of Amsterdam. I related to her first through eye contact, and then the first time we spoke, I knew that she could reach me. She said, I think you want to come inside. She was right.

Unlike most of the girls working in the city, she was actually Dutch. I knew she was not anyone’s property but her own. She took her work seriously and in time, from other conversations with other girls, I learned how well respected she was by her colleagues.

When I came back, her studio was the first place I went. She recognized me and remembered my name, which I thought astonishing, and from the warm feeling that rushed through me as she closed the door and pulled the faded red curtain, she felt genuinely welcoming. Nonetheless, I was her client, and happy to be one. We settled her pay.

Time is money in prostitution. The arrangement is structured. One thing about an hour is that it’s sufficiently short so that the more time you spend talking, the less you spend doing. But it is actually a workable amount of time to explore within. There is space to stretch out and have one or two experiences.

We caught up briefly on the events of the past six months since we had seen one another.

She instructed me to relax, and then handed me some of her weed and a pipe. I smoked a little, and it took me by storm; this was not ordinary cannabis; we were in Holland after all. The effect felt entirely natural, not like a chemical. The colors in the room all flushed gradually, and suddenly I felt so vulnerable for just being there that I could barely say a word. My eyes felt naked.

But what I was feeling was so strong, I thought she should be able to just read my mind.

She sensed my wavering and pushed me.

She glanced at it with her dark eyes, and understood. I placed it on the towel I was sitting on, on her bed.

“And,” I said, pronouncing every word, “I want you to help me drink my semen.”

She smiled slowly. I watched her breathe, her slender diaphragm slowly pulsing and carrying her little breasts with it. I gradually looked up into her eyes.

“You’re like a girl,” she said. “You want to be fucked and drink semen.”

She got up and flicked the lights, leaving on only the black strip lights. Her white bathing suit glowed purple and the room was enveloped in see-through darkness. Everything light-colored glowed brightly.

“I think you need to strip and be on your hands and knees,” she said. I knew what was going to happen. I was planning to do it myself, and this pushed me to let go a little bit, to cede my control over to her and receive.

In the black light, her face was different, perhaps older but surely more mature. The maturity came in the expression of self-awareness she possessed.

I did as she asked and presented my ass to her. She snapped a glove on and lubed me generously.

I felt the cool smooth skin of the plastic press against me, and then into me, as if opening up a secret hidden space for the first time.

I really did moan, and she said, “Good boy.”

She knew what she was doing. She pushed me down, into myself, pushing a wide space open inside of me. I flashed for a moment to how many times she had been fucked in this very room, how many times she had given herself over in this same spot. But that thought got lost to the feeling of being pulled and pushed, reached into, and I could hear each of my breaths go closer to a moan, and then she would push me hard. Pockets of hot emotion would stretch and come close to bursting free. I was being stretched into submission and – utterly embarrassed.

She did this with the feeling that she would never stop. Periodically she would tell me to look up and face the mirror on the wall along the bed. Each time I looked, my face and my psyche appeared increasingly unraveled.

This was clearly intended to induce orgasm. I felt drunk at the edge of a cliff. I was clinging to myself and I could barely stand up.

“Shall I give it to you, or will you do it yourself?” She was really asking me. I listened to the question and thought for a moment.

I caught a glimpse of my face the moment before the warm jets took me. Then we were both looking into my free hand, her face near mine as I shook and groaned as each spurt of semen reached out and pooled upon the next, filling my palm up easily.

I had a moment of disbelief as I realized she could hear the sounds I was making. Then I stepped outside myself, and was watching myself standing there, my bare feet on the cool marble floor, blowing my load into my hand as she carefully supervised.

Then I did it. Looking at her face rather than at myself, standing as if I had just been hit by lightening, I inhaled quickly from my nose, gathering my grassy sent. A moment swung like a pendulum before I skimmed the contents of my hand into my mouth, filling it. Then her hand grasped mine and pressed it into my face, coating my whole face with my sticky, fertile liquid that lit up like a purple mask.

“You’re not taking that off before you leave,” she said as a cool feeling enveloped my cheeks and my forehead. “Look into my eyes and swallow.”

I stood there panting and swallowed, unable to imagine the look on my face but deeply comforted by hers. Not entirely forgiving; a slightly strict face, but compassionate. Still penetrated, still held in her hand, she walked me backwards toward the bed, and pushed me down. I rolled onto my back and drew up my legs. She held me at my center and slowly deepened the penetration as we locked eyes.

“You want to drink it straight from your cock as it’s spurting, don’t you,” she said, somewhat accusingly. “But you can’t. You’re desperate, though.”

She was examining me in her hand. With the other hand, she fucked me in a gentle rocking motion that gradually built momentum.

“It began with my dreams,” I said, panting the words gently. “I would wake up to the sensation of swallowing my cock, and ejaculating. The feeling of self penetration was deep and real and I could taste my ejaculation. When I woke up I was actually ejaculating, usually onto my belly. But I never wanted to drink it after that happened. You are right, I began to get desperate.”

“And so you use women to make it easy.”

My heart thumped in terror, and she withdrew the bulbed thing from me quickly, looked at it, and walked to the sink. I felt empty and set free.

I felt like if moved my face, it would crack. I knew I would be walking out into the street that way, and accepted this situation quietly. The feeling of just having swallowed my orgasm was still full in my mouth, soaked in my scent and lingering in my throat. I could feel the experience coursing up and down my body, mingled not quite with regret, but with disbelief at what I had just done. Sabrina ran the water at the sink.

MY TIME was up. In fact I had gone five minutes over, and she said it was time to dress and leave. She handed me my sex toy and I put it away, and dressed as she reset her space for her next client. She had excellent boundaries that way and unlike some girls who complained about not getting clients, she said she earned as much as the prime minister, at 22 years old. Sabrina is a Capricorn, by the way – so it’s a funny analogy.

She walked me to her door, and pulled open the ancient red curtain. It all seemed over very quickly. But before I stepped outside, she placed me in the window where she usually stood. In fact, she took hold of my shoulders and put me there.

“This is my street corner. This is what I see all day,” she said.

I watched as the men strode by and stared at me – it must have been extremely odd to see a man in the window. I stood there and felt what it meant to be looked at by these less than compassionate faces, faces that merely wanted what they wanted and who planned to give as little as possible.

“May I take some pictures?”

“Sure you may,” she said. I quickly had my camera out and began photographing the scene out of her window. Her reflection was behind me. I thanked her, turned around and embraced her, and stepped out onto the crowded early evening streets, feeling like the whole story of what had just happened was painted onto my face, or rather, knowing that it was.