This is really long, but I had to write it that way to understand it.

The issue of men’s sexual awareness suddenly came to the forefront of my awareness last night, and now I’m still thinking it over today. I talk to a lot of men, so I have opportunities to observe this, but last night was somewhat special. 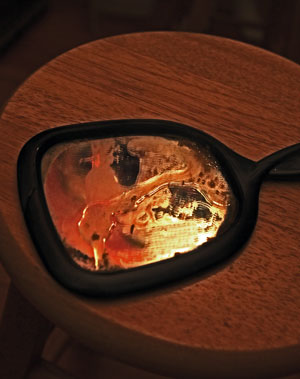 I had sex with a friend, someone with whom I’ve had a longstanding comfortable friendly flirtation. We were in his bar after closing sitting by the fire. Earlier in the evening he asked me with heavy significance what did I want to do later in the evening. It was already around 12:30. I was surprised, because we’ve rarely directly addressed the chemistry between us in practical terms, rather it’s just been something we’re seeped in, to the point that it’s become familiar and comfortable — I tell him things like it’s too bad he proclaims not to like licking pussy, since he has such a mouth for it, and he talks about my butt and my breasts and looks me in the face with desire and I look back.

One night when I was enjoying flirting with another man, Tserang came and pressed his body against the back of mine while I leaned against the bar. It was like a dog coming up to another dog, pregnant with the desire of the moment, yet without plan or motive. He’s married to a Singaporean women who lives with their kid 4 hours away — obviously a case of marriage via pregnancy. He chases a lot of girls and tells me about it. He’s a person who radiates a certain sweetness, but there’s deep confusion too, related to culture and the trauma of regufee-ism and return and probably other personal things I don’t see clearly, all of which has kept me from getting physically involved with him — the sense that there are blockages inside this person that he himself doesn’t comprehend. And yet he is sensual and sweet and sexy and he’s my friend.

Last night I wanted it more directly than before — in the past I’ve enjoyed the experience of having the desire stirred up in me, feeling it, masturbating over it, feeling it openly, without taking it into the realm of specific action with him. But last night I decided I wanted it. Neither of us were drinking, we just stayed until everyone left and then I started to touch his meaty thigh and he asked me if I really want to have sex with him tonight. I told him I was checking it out, checking out my own feelings. We talked a bit about this, about sexuality between friends.

Eventually we turned off the lights in the bar, locked the door, and then I had my long underwear and pants down around my knees while he stroked by pussy and I laid back feeling the heat of the fire on my body. But then we were fucking on the sofa, a condom from his jacket pocket, more tangled jeans and long johns, and it was over very very fast, I haven’t had sex in months, he said, my body on top of his, hearing his breathing in my ear closer than I’d ever heard it before. I’m going to throw out the condom, he said, after a little while.

There are two important things I realized, and they are interconnected. One is the way I’ve dreaded a man coming too soon, the feeling of being left alone on the precipice, knowing that it’s likely he has already left the realm of the senses, while I’m yearning for satisfaction. It’s not a simple matter of him not being able to please me with his dick any longer. I have no trouble masturbating during sex. But it’s that his heart and mind have gone elsewhere. A door has closed; I feel cut off from sharing. There are men who don’t have this problem. I beseech the goddess to continue to provide them to me as lovers. There are men who need it and want it regardless of how tightly their sperm are queuing inside of them, who can ride the waves without terror.

But Tserang isn’t one of those men. In the past I’ve tried to stay there, in the realm of sex, to make them stay with me, whether as a witness or to reignite their participatory passion. But something changed in my mind last night. While he was gone, throwing out condoms and probably washing his cock in cold water in the bathroom in the yard behind the bar in subzero Celsius, I just acknowledged that I wasn’t going to have that experience with him, and with that acknowledgement was the understanding that I can give that to myself when I need it. I dressed myself and when he came back in there was a certain calmness, it was like, not only was I not alone, but he wasn’t alone either. I didn’t directly push his limits.

We sat by the fire and talked. He started talking — it’s strange, it doesn’t matter how wonderful the woman is, how sexy, how much I want her. After I come, I just start wondering, “what am I doing?” I can’t remember which thing was said next. Either I said, “You feel empty?” or I said, “It’s probably already there, that emptiness, on some level, but the desire covers it up for a while, and then it comes back.” or he said, “I actually always feel this way, in my life.” Then the clarity was lost for a moment. I started saying something like, “A lot of men have this problem…” and he started saying something like, “I mean I don’t always feel that way….”

Then my phone gave off a series of text message alerts, and I checked and it was a former student, wild and funny Huardan, sending me messages about reading Martin Luther King’s biography — at 2:30 in the morning. Seemed like an important coincidence, or like the third person’s energy had a purpose. We talked about Huardan, and Tserang said, “For someone like that, of course other people sometimes don’t like him, he’s trying to find something real in life.”

We left the bar and walked through the silent Old Town together and we felt like friends — again, still. I see clearly now that this is someone with emotional-physical blocks that I didn’t fully anticipate. His nipples have no sensation, he says, and he doesn’t like girls to suck his cock, and he didn’t fully kiss me, though I knew he wanted to. And then the abrupt ending. I see that and witness all that. I also feel the degree to which it was somehow important for me to stay with him, on his wavelength, and not to push. That perhaps one of the unmet needs for these men is some kind of need not only for acceptance but for smooth expression of desire from start to finish, unobstructed.

It’s a need for un-obstruction, which comes out so warped in a person whose inner obstructions are yet unconscious. It’s funny, he said, as we approached the main street, I feel like we didn’t even have sex. I know what you mean, I said, though what I felt was that I had seen him without getting my psyche entangled. I had even perhaps gained some liberation. My guess is that he meant he had been as open as he could be without guilt. I pat/slapped him on the back, like a buddy, and the feeling of that touch was almost shockingly loving. He stood there grinning at me while the taxi drove away. When I woke up at 2 PM today, I had a marvelous session of it by myself in bed with the sun glow behind the curtains.

PS – As usual, I need to add something.

One thing that is really fascinating in the experiences with men who shut down right after ejaculating and who ejaculate very quickly, is that before the actual moment of physical contact, I’ve experienced a potent lush sensual energy exchange with these people, via talking with them, looking at them, touching them or being touched by them in casual public situations. But when we’re fully situated in the middle of the SEX, something happens, or rather, something stops happening. I think that it’s fair to acknowledge that anticipation is a potent drug, but it’s power does come from somewhere real, and I’m assuming that in many men (certainly in many women too) there is some terror, avoidance, or discomfort in directly confronting that source.